What We Know about Galaxy Note 10 Before the Launch

In four days we’ll witness one of the major smartphones of the year officially announced. It’s never surprising anymore to see new features highlighted, championship claimed, and figures raised. Instead, we’ve had it sliced by pieces of leaks. And it’s time to put them all together and see what to expect from Galaxy Note 10 by Samsung.

One thing is for sure: it will surpass Galaxy S10 as well as all the other Android-powered rivals, and (given that these are different platforms, so the comparison is biased) even the iPhones Apple is to present the next month. The official information will be here on August 7th, as Samsung unveils the device at its Unpacked event.

Rumors have the rest. We tried to sift the most realistic forecasts from wildest dreams, ditching those already denied and those with no base, like independent concepts by third-party designers. So, here we go.

There has always been only one Note each year. Being the biggest and the most advanced smartphone leaves little space for compromise, and usually Note only could afford having diverse colors and various RAM/ROM volume.

This time it may get different. Making “Pro” versions is not an option now, but a must. Well, don’t mention Apple or Huawei, but even Samsung itself has its S10 in two sizes. Note 10 is probably to come in two size versions too, the bigger being “Plus” or “Pro,” with no significant differences but the size itself.

There are render images that probably show what Samsung Note 10 series (it’s series now!) will look like. The design logically continues what we saw in the Galaxy series previous years. Watch the colors: being Black and Silver isn’t enough after Huawei experiments, so Samsung implements gradients too. Catching up with Huawei Mate series, leaving iPhone and other rivals far behind.

The smaller (or the basic) one will have a 6.3” display, while the bigger version may reach 6.8”. The size will be the main difference; in other terms, the models will be similar, like vendors like this usually do.

It’s a commonplace now that Samsung produces the best AMOLED displays and the quality of the screen is already undoubtable. Its size and shape can be questioned, but most probably it will have Infinity O display, copying that of Galaxy S10. The basic version will have a 6.3” screen. 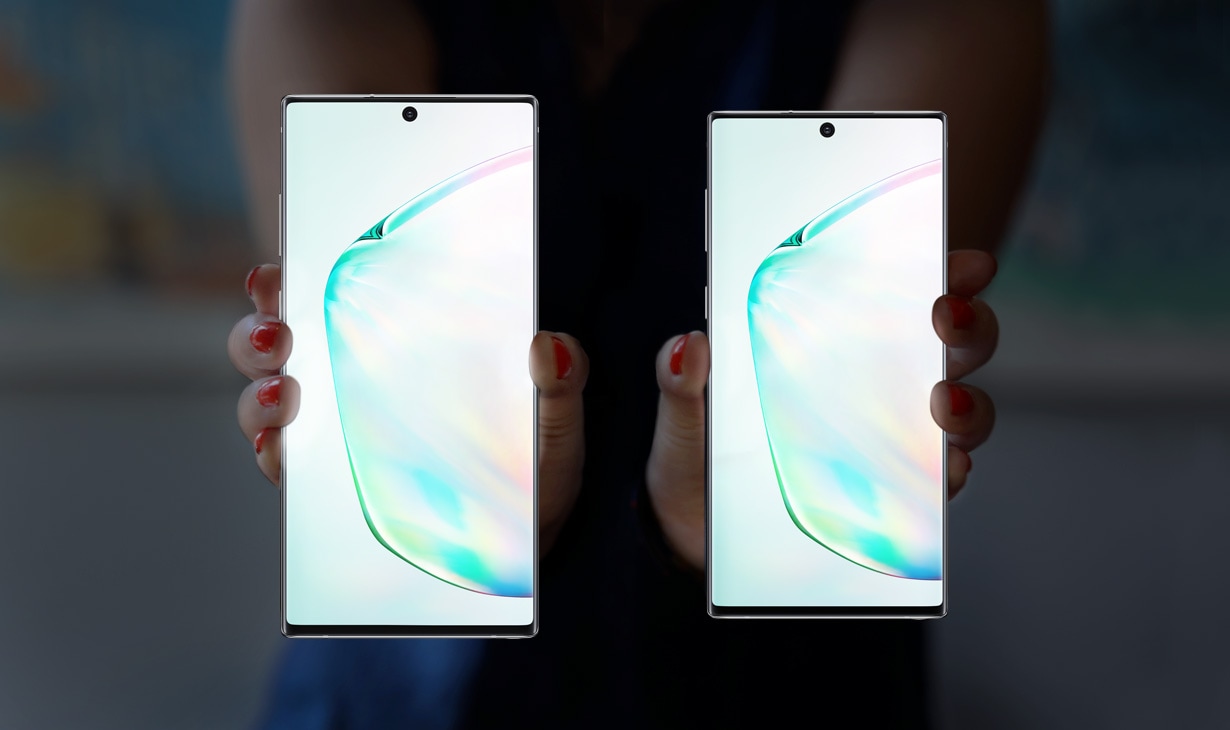 No dark glass coverage has been announced so far. That means that the front camera will be seen on the screen as a small round cutout, but the interface will hide it, and it will finally look even more decent than camera-size ditches the A series comes with.

Under the display, we’ll see the fingerprint sensor. There is nothing like it on the back or on sides, so it will be either ditched at all or hidden under the screen. The latter is more probable. As for face recognition, the renders show no extra sensors it would require, so it will hardly be the only biometrical authentication method.

No need to add that the display will be Super AMOLED, with maximum PPI possible, at QHD+ (the exact resolution and proportions are to be announced yet, but hardly will Samsung step back from its maximalism when it comes to screens).

This time Galaxy Note 10 will probably feature triple camera set. Samsung is known for its experiments even with quadruple cameras, but this time it won’t go that far. Along with the regular camera, there will be a zoom lens and an ultra-wide one. Switching between them in real time will be seamless.

There is no more resolution racing, so it will be quite conventional for today. The main camera will be 12 MP, as well as the zoom one. The ultrawide (for obvious reasons) will have it the biggest: 16 MP (though nothing extraordinary too). The main camera is technically the same it was the four previous years. What’s been upgraded is software, plus extra cameras. But we’ve all seen the progress during these years, and that’s keeping hopes alive. 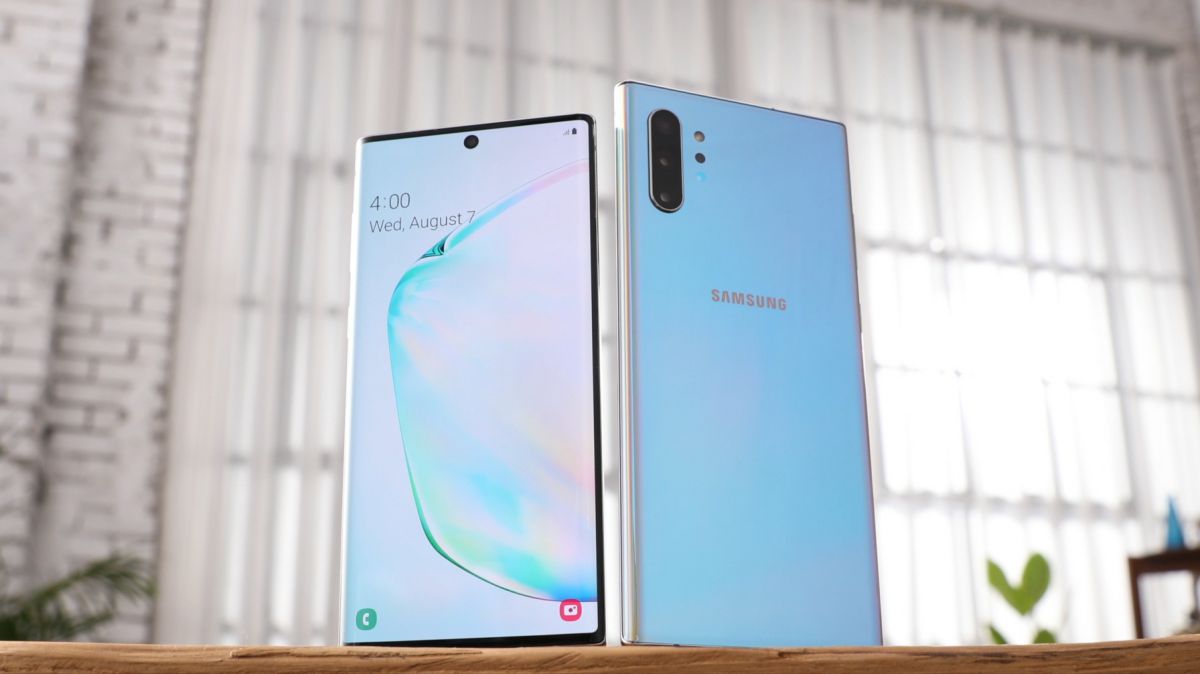 Maybe the Plus version will get a fourth camera, but it hasn’t been confirmed even with leaks. This would be a great chance, as the previous quad camera experiment was, in fact, pure marketing. This time, if it happens, it’s about quality and features. So we wait, and we wonder.

But even if so, what will be the fourth camera for? Evan Blass has it that the camera will be “DepthVison ToF”, what may mean way better night mode. Infrared sensors can do the work partially, and the software does the rest. It may end up with the best night shots or sharp portraits with bokeh we’ve seen in mobile photography.

It’s a tradition by Samsung to release two versions of its flagship smartphones. The US version is built around the latest flagship chipsets by Qualcomm, and for the rest of the world, the Korean company installs its own Exynos chipsets.

This year American edition will receive Snapdragon 855 Plus, an upgraded version of Snapdragon 855. It’s a small step ahead, given that most premium Android models have the basic 855 in 2019. But it’s not Galaxy Note to settle for less.

As for Exynos version, probably it’s the next generation of it, unannounced so far. It’s hard to expect Samsung to use the previous version of its CPU, jeopardizing thus its native version to that Qualcomm’ed. The codename we may think of is Exynos 9825

As for storage, there may be options in volume. The least available memory will be 128 GB, and the biggest one is 512 GB. There doesn’t have to be a MicroSD slot, suddenly. RAM may vary from 8 to 16 GB, according to various sources.

As one of the major memory chip manufacturers in the world, Samsung can afford the newest and the best technologies when it comes to memory. This time it’s UFS 3.0, providing faster operations and (as we hope) best memory durability. Though do you really remember anyone experiencing problems with the smartphone’s memory chip?

It’s the bottleneck of all today’s gadgets: providing better life may mean either software and hardware optimization or battery race. Samsung decided on reasonable 3,600 mAh battery capacity for the basic version and 4,300 mAh for the Plus.

Despite the optimization, including 7 nm CPU, Samsung doesn’t settle. If capacity is limited, the device should be better chargeable. The device will come with a 25W charger, able to charge the battery up to 50% in 30 minutes. It’s far better than the 15W model included with the predecessors. If it’s not enough for you, you can additionally purchase an even more powerful 45W charger. That’s much more power than smartphone industry ever featured; this charging force seems to come from the laptop universe.

It’s a must for an Android flagship phone now to support reverse charging (PowerShare, as Samsung names it). That is, you can charge your Galaxy watch or TWS headphones case directly from Note 10, just putting it on the back on the phone. PowerShare supports up to 15W; unlike another Samsung flagship, S10, it can provide really quick charging.

This also means that, if you’re a power user with a smart watch and a pair of TWS headphones, you’ll have to charge your Note 10 even more often than you would otherwise. On the other hand, this means no extra wires and chargers but that of your very smartphone.

And here is what makes the Note series as exceptional as it gets. This time it will probably be upgraded and capable of “Air Actions.”. This means that you won’t even have to touch the screen with it to interact with the OS. It will support Bluetooth for better interaction, and, if you’re not into smartwatches, you’ll be able to use it as remote camera control.

We can also expect better handwriting recognition and more languages supported. The gestures will also be updated to provide a better experience.

DeX mode is so far quite an experiment, an impressive one, but with little practical meaning. Having all the accessories for DeX mode is just as much trouble as bringing an actual laptop. Maybe Samsung will add more portable options, like foldable Bluetooth keyboards, mice, or – why not? – foldable monitors. Anyway, it’s a dream so far, at least until Galaxy Fold establishes on the market and fosters further explorations.

We also hope Samsung stays loyal to “obsolete” technologies like 3.5 mm jack, but the rumor has it that the company thinks of ditching it. Pity if so. Instead, Samsung may invest more in wireless sound technologies, and we already have multiple adapters and portable amplifiers. Harman/Kardon (including AKG) has enough power to develop new audio technologies, and it won’t take long for Samsung to force them into the market.

The launcher will probably be better optimized for the hardware, considering the pen, the unconventional screen with the cutout for the selfie camera, and Samsung’s cloud services.

Like it or not, but Samsung (along with Apple and Huawei) can afford offering new models for over $1000, and they will be bought. So will be the new Note 10. Whatever you like or dislike about it, there is no alternative Android flagship with a screen this good, a pen, the most powerful hardware, and lots of useful (and not so useful) software included.

As for Plus version, it will probably be even more expensive. It would be reasonable to price it about $1100 for the basic version with the minimum RAM and ROM.

When and How It Appears

The colors haven’t been announced yet; neither the rumor has it. If Samsung follows its own ways, the coloring will be anything but dull, even in the most conservative versions.

Still, there isn’t much time left until these rumors are either confirmed or refuted. On August 7 the company holds its Unpacked event, with the official presentation of the grandest Android smartphone of the year.